For the official launch of Synod 2021–2023 in the Archdiocese of Port of Spain, Archbishop Jason Gordon expressed this synodal experience is not the time to be afraid. The launch was held at the Cathedral of the Immaculate Conception, Port of Spain, last Saturday, November 27. Archbishop Gordon was chief celebrant and concelebrating with him were Vicar General Fr Martin Sirju, Synod Team member Fr Urban Hudlin OP and several clergy from the various vicariates.

Due to the current Covid-19 health regulations, in-person attendance was by invite only. The Livestream was carried by Trinity TV (see below)

In his homily, Archbishop Gordon explained this is not a time for Church to “shrink back and let fear dominate”. “God’s perfect love is with us and so we have no reason to be afraid. We have to go forward boldly and really use every opportunity during Synod 2021–2023 to hear again what the Spirit is speaking to the Church.” Synod, he said, is not the movement of human hands but what “God is instituting in His Church for its renewal”. “From this perspective, our role is to be obedient to what God is asking.”

He also noted the Church will be embarking on a process of deep listening. He explained the synodal process is not one of listening to the estimated seven per cent of practising Catholics nor the 14 per cent who regularly attend Mass but rather, “This has to be a listening of a hundred per cent of the people; toute bagai”. It will include many sectors of society, among them, non-practising Catholics, the disenfranchised, the elderly and those who have conscientious objection to the Catholic Church. “Everything must be heard: the good, the bad and the ugly.” “In everything that will be spoken”, Archbishop Gordon said, “we must also listen beyond the words”, and he hopes this Synod will be a “new springtime” for the universal Church. 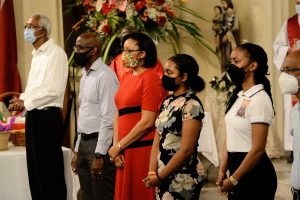 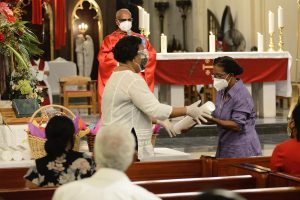 The Synod Team expresses thanks to all stakeholders who made the launch possible. For more information on Synod in our Archdiocese, visit catholictt.org or email: team.synod@catholictt.org

Meet the synod team for the Archdiocese of Port of Spain