Amin – living up to his name not only in sports

Helena was truly ‘Trini to the Bone’ 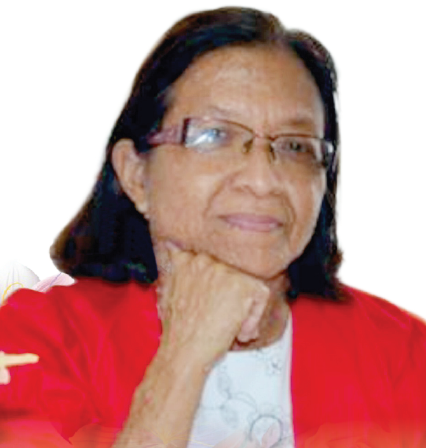 Before the Mass began, there were three testimonies to Helena’s life – one in poetry by Valerie Bethel and Susanne Roget, another by Derrick Phillip, Principal of East Mucurapo Secondary School from which Helena retired in 2019, and an audio message from Bishop Clyde Harvey of St George’s-in-Grenada. The following edited eulogy was delivered by Carol Tajudeen, Helena’s sister.

Helena Kimlin Allum was the sixth of eight children (five boys and three girls) and was the youngest of the three girls. She was born August 1, 1959 and grew up with our parents, Charlie, and Clara Allum (now deceased) in the fishing village of La Lune, Moruga.

When Helena was about three or four years old, she was badly burnt on All Saints night. Fascinated by the lighted candles placed along the steps, she got too close, and her dress caught afire.

Helena was burnt from her waist up; her whole chest was raw. Mummy was adamant that she was not leaving her at the hospital; she looked after her and nursed her back to good health. By God’s intervention, there were no scars.

During that time, I had my own family and Helena and some of our other siblings were able to live with me at Curepe to pursue tertiary education at the University of the West Indies, St Augustine (UWI).

At the University, Helena was among those who started the Legion of Mary on campus, out of which was born the Catholic Students Movement with Sr Monique at the Chaplaincy.

Helena was also one of the founding people with Fr Michel de Verteuil CSSp and Sr Diane Jagdeo OP who started the Pastoral Centre at UWI. That group became the ‘Homecomers’, still very much alive today.

After graduating from UWI, Helena participated in a project started in Tobago with Fr Sebastian Madhosingh. The group did community work, especially with young people, grounding them in the faith.

Helena was on mission for four years in Tobago with Sr Catherine Bernard OP and Sr Rosemarie Carvalho SJC. During that period she taught at Roxborough Composite Secondary School where she continued working with the youth, both at school and community level.

After her stint in Tobago, Helena returned to Trinidad and opted to teach at East Mucurapo Secondary School where she felt she could continue working with young people.

Years down the line, she became the Vice Principal of that school where she worked until she retired. Outside of school, she worked with Bishop Harvey in the Holy Rosary and Gonzales areas.

Although Helena pushed along with a lot of her initiatives throughout her career, she equally faced her challenges. After the burn incident she suffered from rheumatic fever and during her secondary school years Helena gradually developed neurofibromatosis, a genetic disorder which caused her nerve endings to protrude externally onto her skin. This led to Helena having to undergo numerous surgical procedures to manage her condition.

Helena, however, did not allow this difficult condition to deter her from her life’s work. She was not only involved in passing on and living her faith but travelled abroad and went on pilgrimages to other lands.

She could be seen walking around the Red House in protest with other teachers, when the Trinidad and Tobago Unified Teacher’s Association (TTUTA) was negotiating for better working conditions for teachers.

She enjoyed a good Carnival lime and fete. In fact, according to her favourite singer David Rudder, she was ‘Trini to the Bone’.

Helena was very family oriented. She was present at every family event. She welcomed all her nieces and nephews and was very proud of their educational pursuits and achievements, lending support to them in whatever way she could.

Uniquely enough, one of the things that Helena did was to seek out persons suffering from the same illness that she had. She did find a few and visited them.

It was her ultimate goal to form a support association to raise awareness about neurofibromatosis. That was her ‘after retirement’ project, but that was not to be, Jesus had other plans.

A new challenge arose for Helena as she was diagnosed with cancer, leading to the amputation of her leg. Learning that the cancer had spread thereafter to other areas, Helena turned to the doctor and said, “So I cut off my leg for nothing?”

We quickly realised with each passing day that her time with us was very limited.

Kimlin, you have fought the good fight. Go now to the next chapter of God’s great plan for you as He welcomes you home, to meet mummy, pappy, grandma, Dexter, Trina, and all of your other departed loved ones.