Santa’s cause is about love

Many persons from diverse backgrounds have come to our shores and made this land their home. They have brought culture, traditions, skills, some of which have been incorporated locally and given the T&T touch.

Writer LARA PICKFORD-GORDON approached a few migrants to learn about their Christmas traditions. They also shared their customs on New Year’s Eve. It might be taken for granted but not all countries celebrate Christmas.

Austine Okeke, has been in Trinidad for six years and is a member of the Igbo tribe in the Imo State. Different tribes have different languages and cultural practices.

He said Christmas is a “big thing” in his community like in Trinidad and Tobago with people painting and cleaning their homes to have it “looking nice”. Nigerians who live abroad or in other Nigerian states traditionally return home at Christmas to be with their family, unless there is another important reason to bring them home. “All your friends who live abroad, who study in Lagos and Abuja, they all come back in that period of time,” he said.

On Christmas morning, his family usually goes to church for a short Service.

His community celebrates the Okonko Festival, December 25–26, which he said was “a kind of masquerade” but not like Carnival in T&T.  It starts from around 4 p.m. and goes into night. People from different places visit for the festival.

The costumed players are covered from “head to toe”. “The masqueraders dance around, ask people for money and stuff and if you don’t give, they might flog you. Some people take pictures,” Okeke said.

The masquerader tries to keep his identity concealed. “The masqueraders have three people who would be collecting the money for them, they dance with you.”

He noted a “corrupt part” had entered the tradition with persons paying the masked players to go and flog their adversaries. “The masquerader will creep up on you and flog you and you don’t know the reason why you [are] flogged. Someone you had issue with has bribed the masquerader to deal with you.” People can get flogged if the masquerader feels the person is “rich” and did not give enough money. 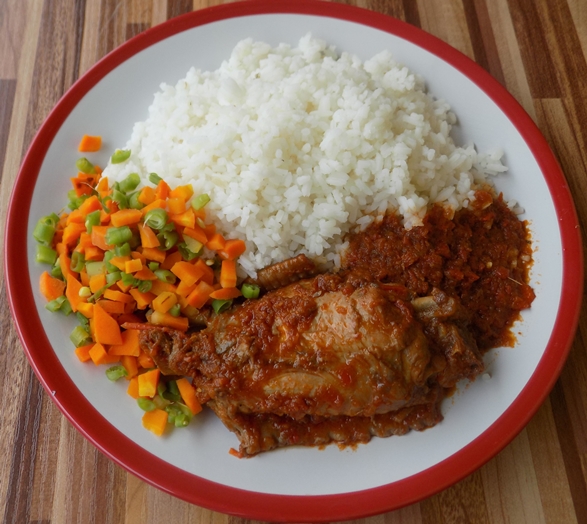 Okonko music is made with African drums. “There is no keyboard; there is no guitar. It is just four or five African drums; we call it conga…There is an open tent which they call ‘ogba’ and the drum players stay in the ogba completely away from everyone playing. In there, you have to be playing with them”.

Okeke said the meal for Christmas time is stewed chicken, rice, and salad, consisting of cabbage, carrots etc. “Every home must cook that…I doubt there is a home you go, a family that you won’t get stew chicken, rice and salad.”  Exchanging gifts on Christmas is not a practice in his tribe but family members returning from abroad or the city are expected to return with gifts.

He added that what they received at home was the “best” cooked food and being taken care of by family. The foreign Christmas music is played because they do not have local artistes such as Scrunter (Irwin Reyes Johnson) producing local seasonal songs. However, Afro-beats are normally played at homes. 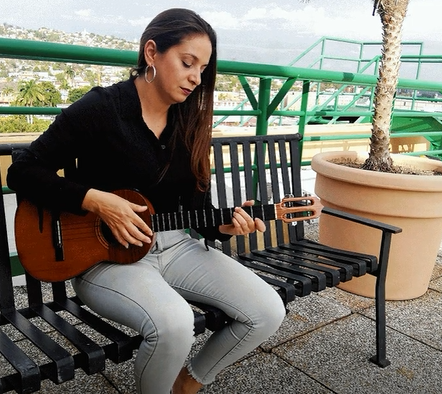 Svetlana Liansky said with a tone of nostalgia, “I was born in Mérida, a city where its mountains are dressed in white, where the characteristic aroma is a freshly made cup of coffee, a friendly city called the ‘City of Gentlemen’.”

Her grandparents were from Russia and migrated to Venezuela during the Second World War. Although she has Russian roots, she did not grow up with its customs and said what characterises her as Venezuelan are “traditions including food and music”.

Liansky, who has been in Trinidad three years, points out cultural similarities with Trinidad, for example, ‘Hallacas’ which is known locally as pastelles. She said this was “almost our only meal in December at breakfast, lunch and dinner”.  Hallacas are prepared as a family and more than just getting together to do this “is the family sharing when you are doing it”.

Liansky added, “it is the Christmas music that we listen to accompanied by songs and dances that lift us up and remind us of where we come from”.

The Christmas meal consists of pan de jamón (a bread filled with ham, raisins, and green olives), pernil (pork) and salad such as potato salad with green apple and chicken.

Liansky said their favourite traditional Christmas drink is ponche crema also known as Venezuelan eggnog. Does this sound familiar? The only difference she said was, “maybe ours is a little more thick”.

Liansky said Christmas is celebrated December 24: “we make a family dinner, and we open a gift at midnight”. 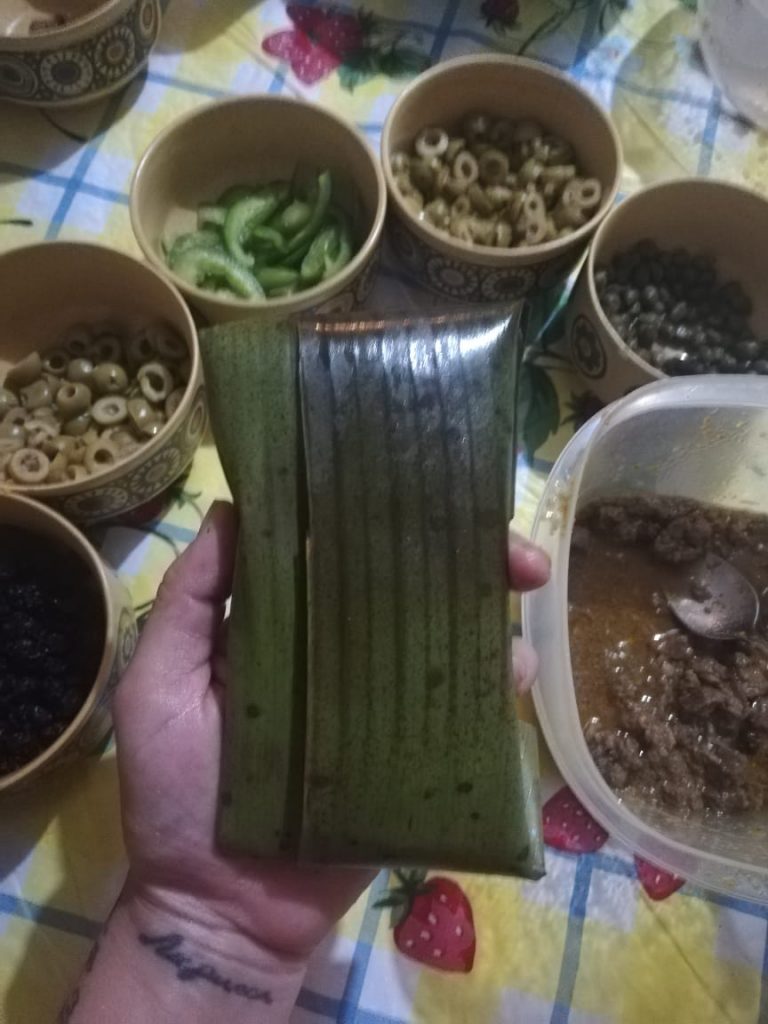 The T&T Parang music is a familiar sound to Venezuelans. “In general, many of the songs of Parang are songs from Venezuela but with this new rhythm that sounds delicious”. She continued, “of course this makes me feel more at home because of the songs, because of the human warmth and because the cuatro is a national instrument in my country”.

Their traditional folk music in December is known as Gaitas. Liansky is a cuatro player and has played with Sonrie, a Latin music band, and collaborated with other bands.

She said December 31 is a day when yellow underwear is worn for good luck in the new year. “We walk with suitcases which for us means being able to travel more the next year, and we eat 12 grapes before the 12 o’clock chime and make 12 wishes. We embrace as a family and we tell each person we see, ‘Happy New Year!’ and we hug them”. 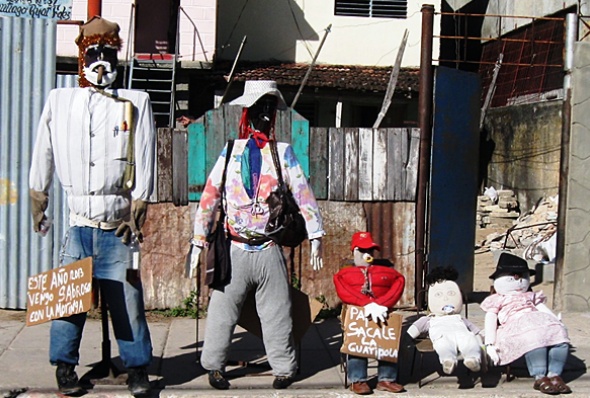 As a Communist nation, Christmas is not celebrated in Cuba. Yasmany Castro Guevara said, “Communism says this is a matter of capitalism. What we celebrate is December 24 as Good Night and December 31 as the end of year”.  The ‘Good Night’ is not a major celebration, he explained, “it is just a meal at night with the family, those of the house”. Guevara said this tradition has unfortunately been “lost a lot”.

On New Year’s Eve however, there is a celebration. Guevara details the day’s activities as follows: “It is the day you get up in the morning, turn on the grill and start cooking the pork. It is the day of stuffed tostones, banana fries, Moorish rice (congrí), yucca in mojo sauce. It is the day of music, drinks and that family and friends are together enjoying every moment”.

Congrí is beans and rice, red beans or black beans are used.  Guevara’s use of the term “Moorish rice” however, is suggestive of the Spanish influence on the island’s history. Black beans and rice are also known as ‘Moros y Cristianos’ (Moors and Christians). 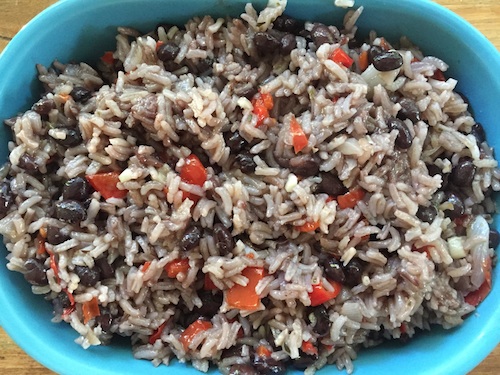 The website 196flavours article ‘Cuba: Moros y Cristianos (CONGRÍ)’ states, “the dish is a reference to the African Muslim governance (early 8th century) of the Iberian Peninsula and subsequent Reconquista (15th century) in which Spanish Christians led by wealthy families in the north of Spain forced the Moors from the south of Spain into Africa”. In Valencia, Spain, a festival takes place commemorating the ‘Reconquista’.

Also, on the menu: stuffed tostones or tostone rellenos are plantain cups stuffed with shredded beef and yucca in mojo sauce i.e., cassava in garlic sauce.

Another tradition on December 31 is to create life-sized dolls with old clothes and stuff them with straw. The doll is called an “old man”. “That has many years of culture in Cuba, more than 100 years…these will be burned at the time of the New Year to burn the old year and enter the new,” Guevara said. It was started by persons who settled in Cuba, “of the upper class at that time”.