November 1st: Feast of All Saints 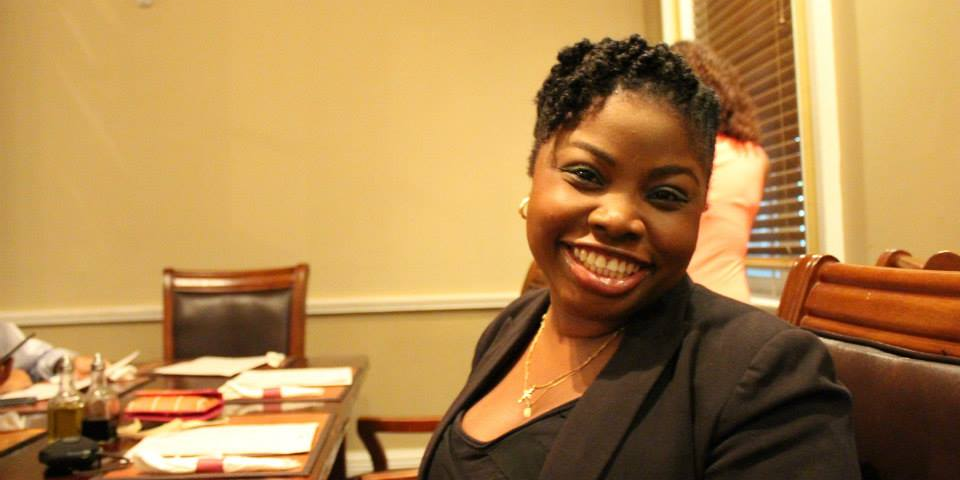 “If you understand how government and politics operate, you would realise that they affect every aspect of your life. Saying that you don’t like politics or you want nothing to do with politics, does not mean that politics does not have anything to do with you.”
While some may tend to view politics with “a skeptical eye”, for Sharla Elcock, 37-year-old Legal Officer I at the Parliament of Trinidad and Tobago, parliamentary experience is teaching her humility and to be of service.
She has always been interested in local politics and the system of governance. Employed with the Parliament since December 2018, Elcock’s portfolio, in brief, involves both legal and procedural work, which range from developing employment contracts and leases for constituency office buildings and providing opinions for legal matters to assisting at Sittings of Parliament. 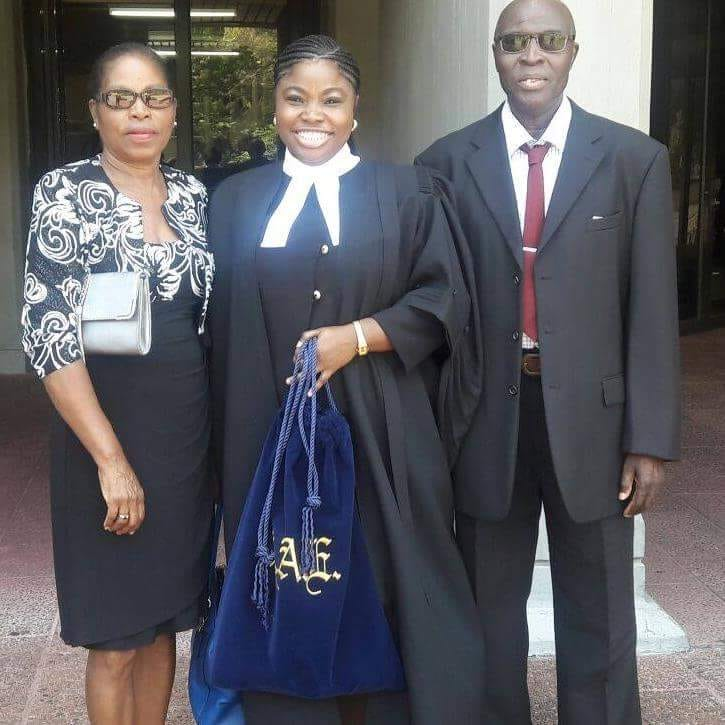 Elcock has always worked in organisations that focused on helping people and creating policies that advocate for disadvantaged persons.
She was a Programme Assistant (consultant) at the United Nations Development Programme (UNDP) (2015-2016). She assisted in the preparation and technical review of consultant reports and other substantive documents and formulated concept notes for projects on sustainable development as well as for the development of a National Poverty Reduction Strategy. Elcock was also Programme Assistant at the Caribbean HIV and AIDS Alliance (CHAA) in 2014, International Relations Officer at the Ministry of Foreign Affairs (2011-2014) and Programme Coordinator at CHAA (2009-2010) where her duties included preparing documentation for the achievement of a US $16 million United States Agency for International Development (USAID) Cooperative Agreement.
As such, her career choice, she told Catholic News via phone was simply a “marriage between the two”—government and politics, and law.
While her brief stint in family law strengthened her experience and knowledge, enabling her to “better advocate for persons”, it was emotionally taxing.
After four months of practice Elcock sought to get back to doing what she really enjoyed—government and politics.
Elcock is the holder of a Master’s Degree in Government and Politics (2009) and a Bachelor’s Degree in Government and Politics and French (2008) from the St John’s University, Queens NY.
Though she is more “comfortable” working in parliamentary settings, working in Parliament is not as glamourous as one would assume, according to Elcock.
To the public, Parliament is comprised of the members of the Senate and the House of Representatives who vigorously debate the issues of the day. Constitutionally, Parliament consists of the President, the Senate and the House of Representatives. However, there are many persons working quietly and assiduously to ensure that the Members of Parliament (MPs) are given the legal, procedural and technical assistance to successfully perform their duties.
“You are there to serve the parliamentarians. You are there to ensure they have all the tools they need to effectively come up with legislation, scrutinise government policy and represent their constituents. Your job is basically about service. I think this is the first time I’m articulating it,” Elcock explained.

Lessons in humility
Humility, she underscored is one of the greatest lessons she is learning while working in the Parliament.
She continued, “While I work in parliament, I need to be humble. And the best part about it, when you do good work, in all of the jobs I’ve been in, none of them, [the] praise comes to you, none of it, and I think [that] works best for me at the moment.” 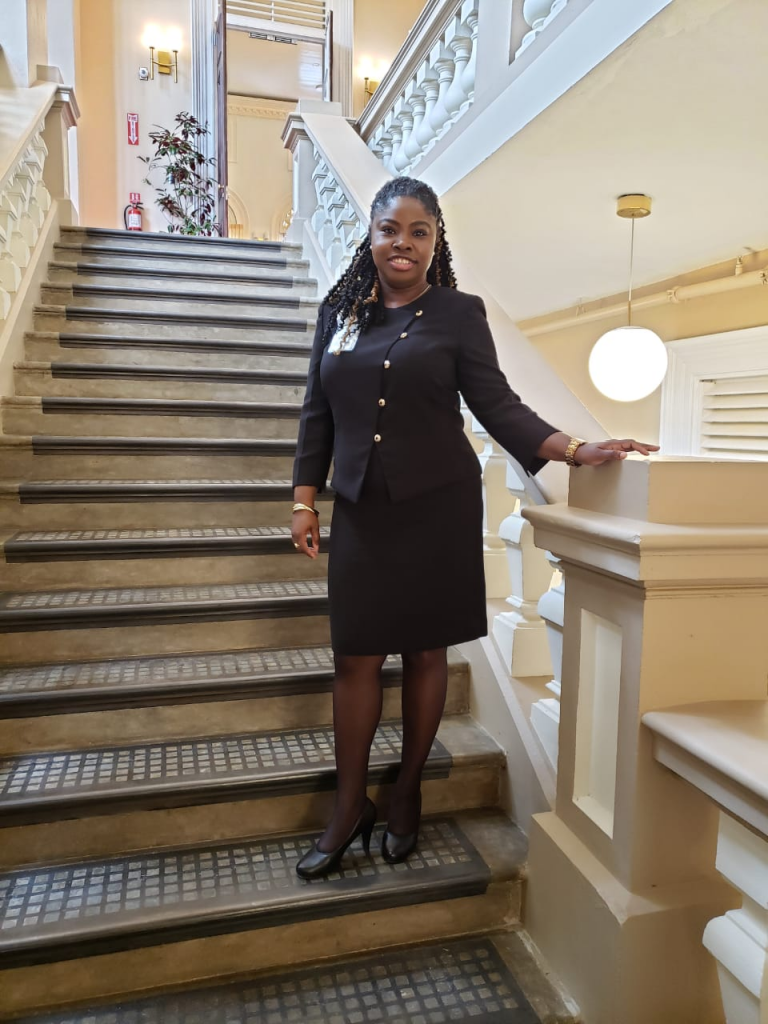 Of her faith, the parishioner of St Philip and St James, Chaguanas also stressed the importance of always walking in God’s purpose. She recalled a recent homily from Archbishop Jason Gordon where he denounced the dichotomy of giving to Caesar what is for Caesar and to God what is to God. This instruction, she said, really spoke to her.
“Sometimes we tend to think that this is my job and my job is on this side and this is my Catholic identity and my Catholic identity is on the other side. I realised that I can’t make a dichotomy with my job and my Catholic identity. If I’m who I am and I belong to God then I have to remind myself I can’t split Sharla Elcock in two. It’s God or nothing….”
Her advice to persons who may be interested in pursuing a career in government or politics is to first pray and ask God to show you His purpose for your life. Wherever God decides to put you, go brave; do not walk fearfully.
“If you look at my resume and how things happen, I have found myself in positions that may not have been planned for me. Doors had to close or situations had to happen in order for me to get where I am at the moment. When I got too comfortable in an area that was not destined for me, it was shaken again,” she shared.
She has noticed when plans are put ahead of God, these are “side-tracked” and God will redirect the person.
“…don’t do like me, don’t be stubborn and do what you want to do and then expect Him to approve it after. I do not know why I’m learning this at 37. But that’s what I figured out,” Elcock joked.
Questioned on her ambitions for the future, she responded: “that’s a tough one”. She explained because she has done some job-hopping in her years, she is now at a place where she is happy and settled. Ultimately, Elcock said, whatever lies ahead, her ambition is to be where she can be of “greatest service” to the people of Trinidad and Tobago. 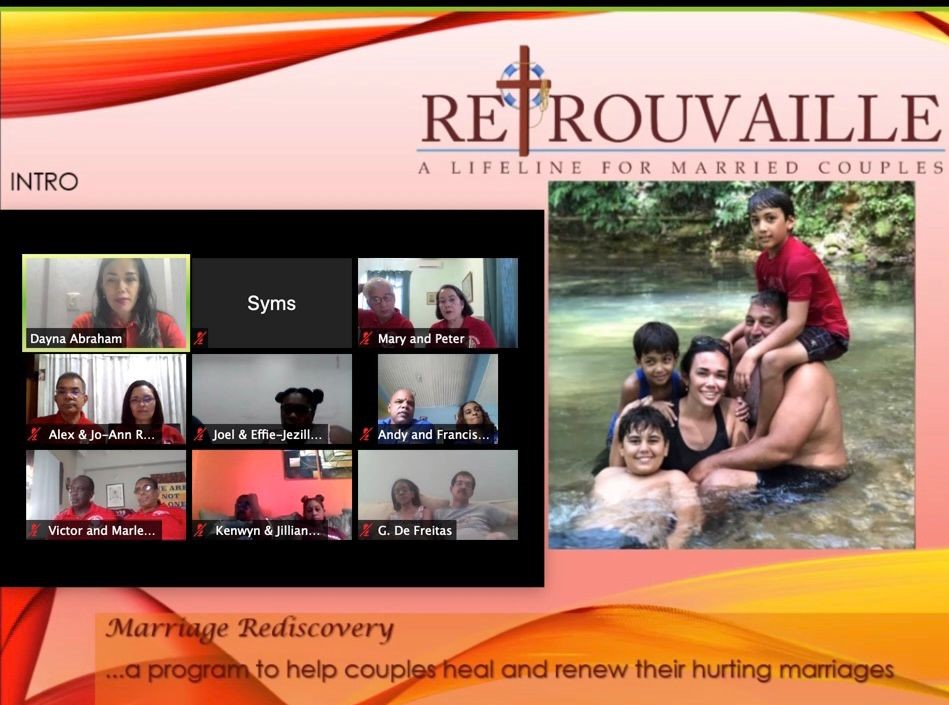 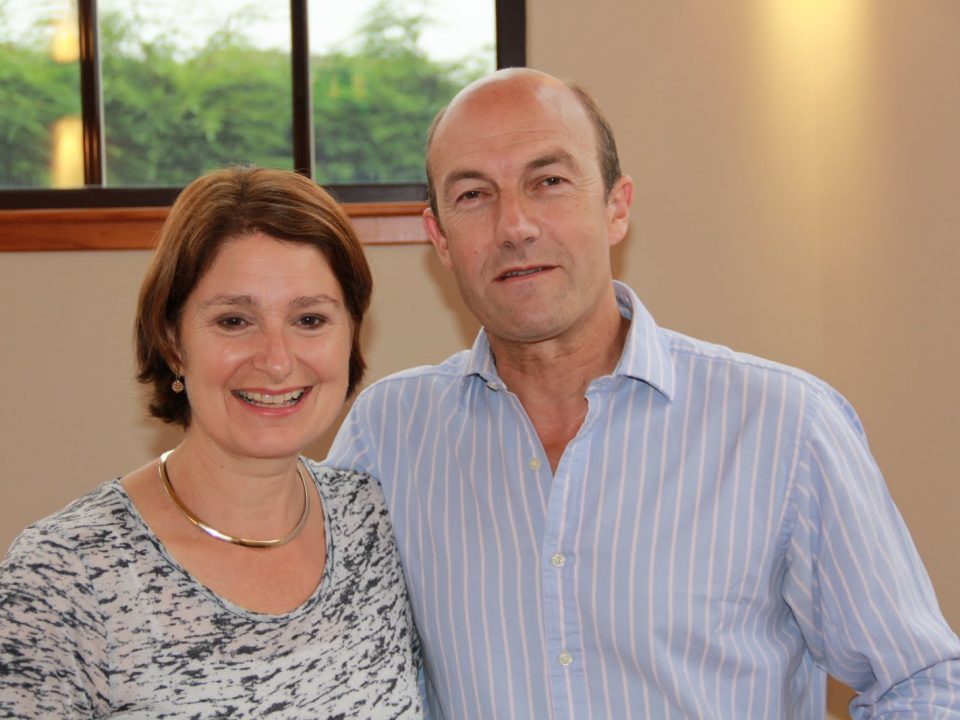 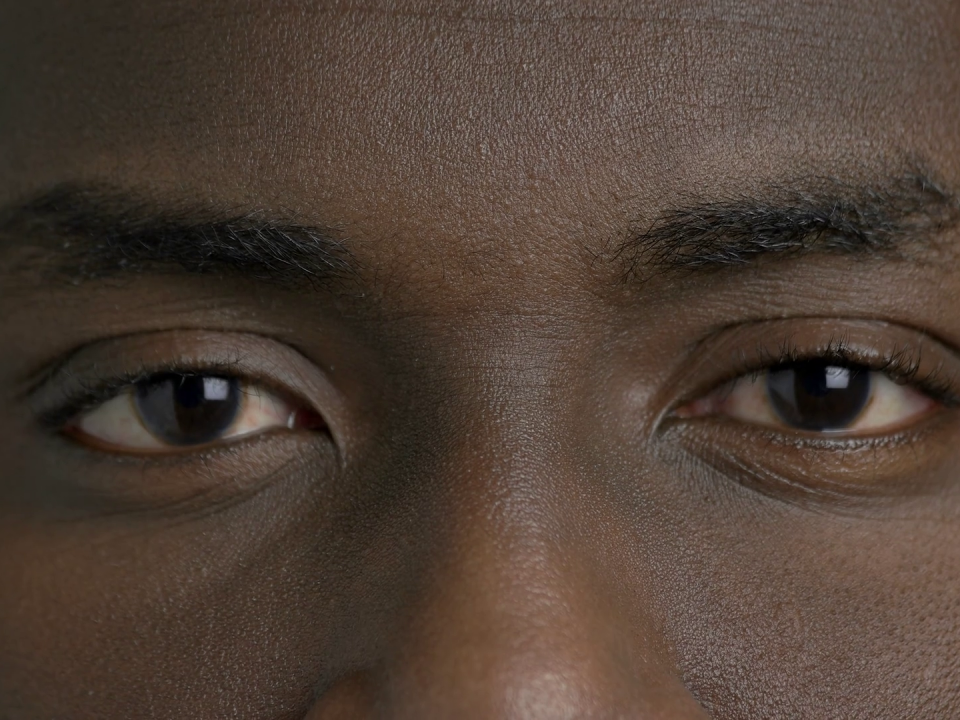 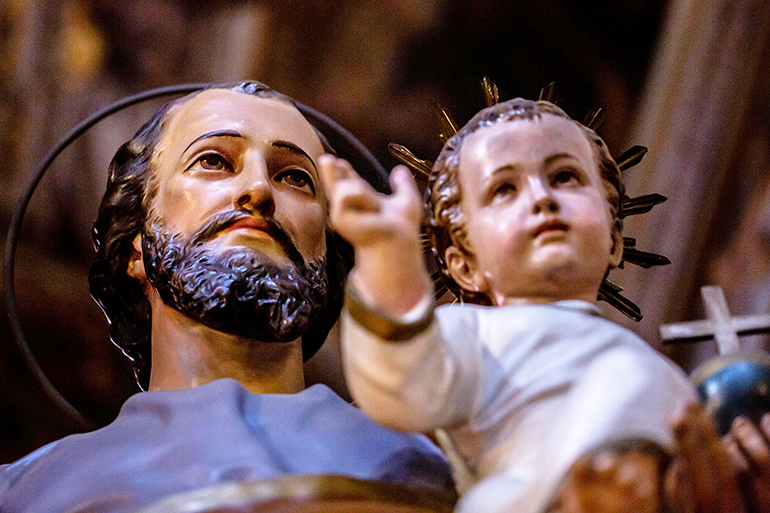 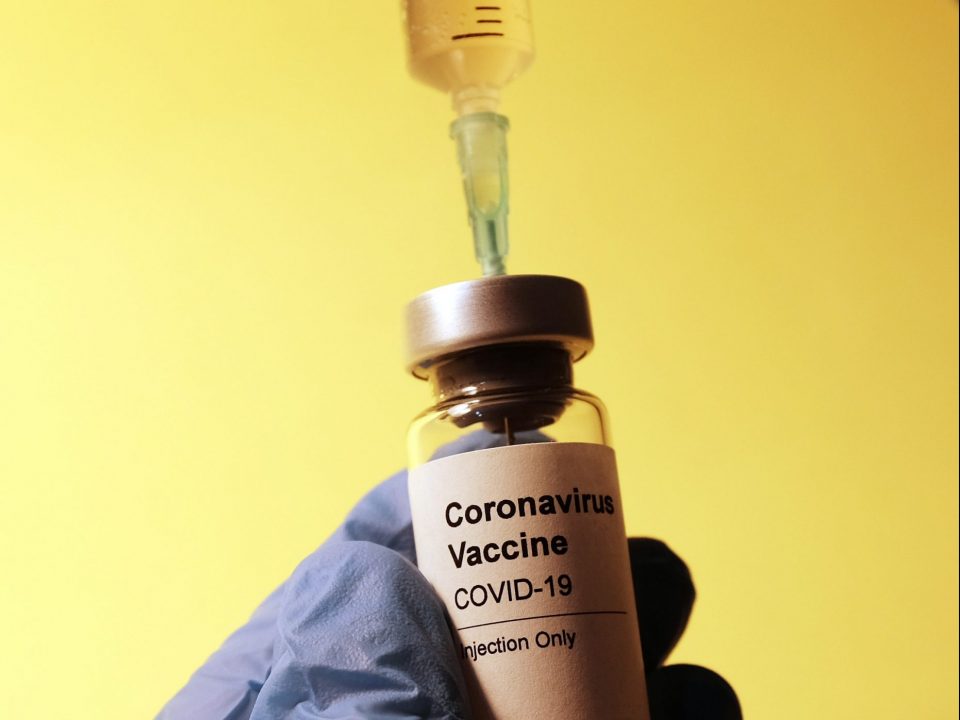