Questions and Answers on Fratelli Tutti

Created out of love, to love

Friday, October 16 was a day which will be remembered with joy and gratitude by the Acting Principal Maria Daly-Worrell, staff, and pupils of Siparia Boys’ RC School.

It was on that day former student, Machel Montano returned to “give back” to the institution where he obtained his primary school education. It is also where his foray into the world of Calypso and Soca began.

While in the Second-Year class, he was asked by the teacher Catherine Teelucksingh if he would sing a Calypso for a school competition. He agreed, sang and won the competition, earning a whopping $20 with half of it being shared among his backup singers.

In Standard Three, he sang ‘The Letter’, composed by the late Ashford Joseph, after which he entered the “big people” competition with his famous ‘Too Young to Soca’, and the rest as they say, is history.

Machel shared that coming onto the compound brought back pore-raising memories. He reminisced about his years as a “boy school” student, and even referred to a picture of himself on a banner at the school as him when he was cute!

In his address he thanked the Ministry of Education, Daly-Worrell, his mother Elizabeth ‘Lady’ Montano who encouraged him to get on board with the initiative and the other providers, Unicomer (Courts) and Blue Waters for partnering with him to make education in this “new normal” attainable for those children who needed the assistance of the devices.

Machel pointed out that as a student, Patricia Worrell (deceased) was the principal and Stephen Daly was the Vice Principal. Now he has returned to meet Daly-Worrell as the Acting Principal. It feels like family to him and he was glad to be part of it.

Machel also stated that the circumstances caused him to reflect on the old adage, ‘It takes a village to raise a child’, and the present circumstances make him and the other providers part of the “village” in giving these children the opportunity to realise their full potential. 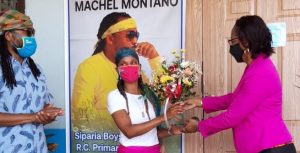 Machel Montano and his wife, Renee receive tokens of appreciation

His organisation, Foundation for Greatness, was born out of his personal desire to be great. After doing some soul searching and studying the lives of those whom he considered great, Martin Luther King Jnr, Nelson Mandela, Mother Teresa (St Teresa of Calcutta), Mahatma Ghandi, he decided to use his foundation to assist children to achieve their greatness which he believes is inherent in each child.

Citing Siparia Boys’ RC as the institution which gave him his foundation and was instrumental in his achieving greatness, he expressed his gratitude and pleasure at being able to give back.

He entertained those gathered with a taste of the first Calypso he ever sang in the school’s competition. The lyrics were so appropriate for the occasion:

“Do you think you deserve all that you have got,

So, what you going to give your country in return,

Will you be willing to share all that you’ve learnt?

Only you can decide your fate after you graduate,

Remember the future of the nation depends on the young generation.”

The principal, pupils and staff extend their heartfelt gratitude to the Foundation for Greatness, Unicomer and Blue Waters for their initiative and wish them success in all their future endeavours.