“Thank you for keeping parish alive during down time”

Kelvin Dubrie once had to choose between learning a skill or earning more money; he chose a future.

Dubrie, a driver with the TT Prison Service is working on the new pews for St Finbar’s RC Morne Coco, and voluntarily teaches woodworking in the Port of Spain prison. Dubrie, 53 years, has an unassuming manner so it took some convincing and clearance from his employer before he agreed to be interviewed. This happened August 21.

Dubrie’s interest in woodworking was sparked when he was a boy living with his family in the village of San Pedro, Poole, Rio Claro. A neighbour who lived nearby had a workshop and on weekends and school holidays children from the community helped him sand and cut wood. They were given $10 or $20. “We liked it, with $20 you could buy something good,” he said. Dubrie attended Poole RC primary and went on to Princes Town Junior Secondary and Rio Claro Senior Secondary. Dubrie and his two brothers had to do chores before attending school. “Animals to see about, my father and them had a business, they used to sell roti so we had to clean chicken,” he said.

He left school with two ordinary level passes in English and Principles of Business.  He liked these subjects and also said he was good in technical drawing, metal work and woodwork. He does not “blame” the chores for his exam results saying casually with a smile, “I wasn’t too bright”. Time would prove him wrong.  From secondary school he worked with his father in the family’s garden which yielded tomatoes, cabbage, pepper and corn.  Dubrie said, “I wouldn’t say we were living in poverty…We were not starving for nothing”. From 7 a.m. to lunch time he worked in the garden. Dubrie did not like agriculture and told his father he wanted to learn a trade. He was interested in auto mechanics. The elder Dubrie reportedly responded, “if you want to learn a trade you could have tell me I would not have send you to school”. His father told him he was a “big man” and could earn his own wages.

An opportunity came through the neighbour who owned the workshop.  He told Dubrie of a job as a carpenter’s apprentice with a contractor for $40 per day. When Dubrie approached his father, the response was “no” he had to work in the garden.  The neighbour made an intervention and his father relented. Dubrie was 18 years.

Another opportunity emerged while he was on a job site in San Pedro, Tortuga. The owner of the house invited him to assist with his boat docked at the Yacht Club, Pt Cumana. Dubrie used his weekends to repair cupboards etc. From here, the boat owner recommended him to someone at Industrial Marine Services (IMS), Chaguaramas. He left his “comfortable” job with the contractor to join IMS where he learned new skills, about new materials from the foreign owners and travelled to other islands on jobs. “They liked me too I was young, brilliant and I like the work.” Dubrie said woodwork for boats is of a high standard.

“In a boat everything has a curve because it is cut to fit the boat and the materials and glue and stuff more expensive and it has to be of a certain look—it can’t be shabby and shaky”.

Passing on a skill 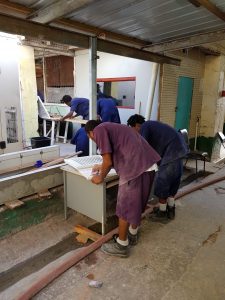 Four years ago, the officer teaching woodwork at the Port of Spain prison retired. A year later, the post was still vacant. Dubrie had been a regular visitor to the workroom because he liked the work. He spoke to superintendent at the prison Charmaine Johnson and offered to teach the prisoners. The equipment was out of use for a year and had to be repaired; Dubrie used some of his own money for this. The workroom resumed operations producing cupboards and other furniture for the prison.  He said, “At first, we used a lot of pallets then I got a lot of old pews from St Finbar’s…now we are in a better position, we buy from a hardware and saw mill”.

Dubrie said, “Some of the guys will have some ideas, a couple real professional in woodworking—they would have learned outside.” The men in workshop were “pre-release” prisoners nearing the end of their sentence. Woodwork was taught during the week within the hours of 9 a.m. and 5 p.m.  He said, “Most times when an inmate does not know anything about the trade, I will start by teaching him about the tools and how to use them. I also have a few woodworking books, then they would be put to help a more senior jointer.”

Dubrie said woodworking can be used to earn a living through skills such as sanding, or spraying (varnish/paint) on furniture. “A couple of the guys when they go out, they say they are going good and got a little work to do, that makes me feel real good.”  He feels “satisfaction” teaching the men.

Dubrie describes his love of woodwork, “you don’t have to follow anybody pattern you could make your own design, and you could take anything and make something”. When his home workshop began, they constructed furniture from pallets.  Someone familiar with Dubrie’s skill recommended him to St Finbar’s which had some small woodwork projects. Two years ago, he was asked to provide a quotation for 130 new pews and a sample.  He said, “They liked what I showed them and asked when I could start”. His workshop is equipped with updated tools and has two full-time workers. They have been steadily working on the pews, trying to do eight every six weeks.