MPs, it’s not about power, but service

Avoiding pregnancy – for the long haul 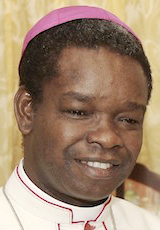 The Holy See’s new Ambassador to the Antilles is Nigeria-born Archbishop Fortunatus Nwachukwu. News of the papal appointment was made public last Saturday (November 4) at noon, Rome time. He has replaced Archbishop Nicola Girasoli who left in early August for his new assignment as the Nuncio to Peru.

A letter from the Apostolic Nunciature (Vatican Embassy) to the bishops of the Antilles Episcopal Conference stated that an arrival date for the new Nuncio was to be determined.

Archbishop Nwachukwu, born on May 10,1960, is the Titular Archbishop of Acquaviva and for the past five years has served as the Apostolic Nuncio to Nicaragua, Central America. He was ordained a priest on June 17, 1984, with incardination in the Diocese of Aba, Nigeria. He possesses a Doctorate in Dogmatic Theology, and a Doctorate in Canon Law.