Why World Cup woes for US 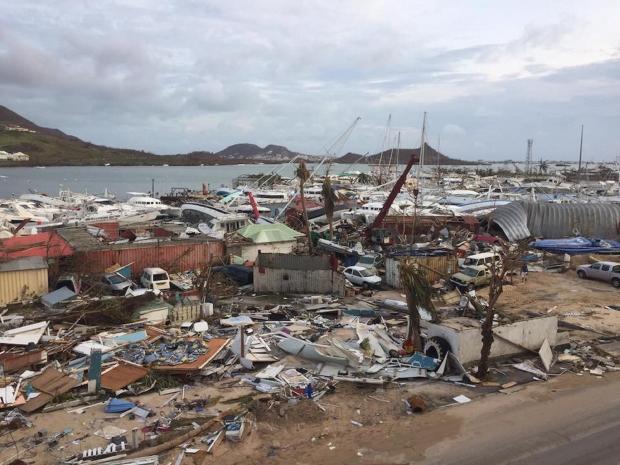 Battered Barbuda, in the wake of hurricane Irma.

The Society of St Vincent de Paul (SVP) in the Diocese of St John’s-Basseterre has been doing its part to assist Barbudans displaced by Hurricane Irma and persons in Tortola, BVI.

She added, “I actually spoke to a priest who was based in Tortola and just got in the day before the hurricane struck. He also confirmed things were really bad there. At one point, he had to be wading through water to get to the little lodging upstairs.”

Barbuda’s entire population of less than 2000 was relocated to Antigua. “Some are staying with relatives; some who don’t have relatives have to stay in the facilities provided by the government,” Collins said. The Barbudans are housed at shelters at different locations but she said the SVP, as well as Antiguans, have been helping because of the traumatic experience they went through.

Two students from Barbuda are being educated at the Christ the King High School. Collins, the principal of the school, said the board of the school contacted the government with an offer of five scholarships for Fifth Form students.  Two parents took up the offer. The scholarship covers tuition and lab fees. The school obtained further assistance from private organisations to purchase uniforms and text books. The parent of one child was a resident of Antigua while the other lived in Barbuda. “We are trying to see how best we can help them,” Collins said.

Collins said the SVP in Antigua would be responsible for Tortola, Vincentians in St Kitts would look after Anguilla and SVP Barbados would assist Dominica.  Antigua was still “reaching out” to Dominica because Dominicans have been residents of Antigua “from time immemorial”. Collins said, “There is quite a large group of Dominicans living here; I would say nothing short of 10,000 out of our small population of 70,000-80,000.”  A week after Hurricane Maria, letters were sent to parents appealing for water, juices, tinned food, and toiletries. Her office had goods stored to be collected for distribution. She said water was in high demand.

Mary-Rose Knight, Executive Secretary Central Council said the SVP Antigua is the registered local representative for Food for the Poor and a regular recipient of supplies from the Florida-based organisation. Knight said, “Bishop Robert [Llanos] asked for the stuff but it has to come to St Vincent de Paul….whatever organisation or charity that needs anything from from Food for the Poor it comes to us and we hand it over”.

Ten 100-pound bags of beans were handed over to the Antigua and Barbuda National Office of Disaster Services (NODS) and a container from Food for the Poor was coming. Apart from food, Knight said Bishop Llanos had asked for other things.  The NODS warehouse was utilised for storage of disaster relief supplies the SVP cannot house at its own facility.

Knight said she got in contact with Bishop Gabriel Malzaire of Roseau, and the SVP would send whatever it can to help the devastated country. She said SVP Barbados sent a container of supplies and anyone offering assistance would have to liaise with Bishop Malzaire. – Lara Pickford-Gordon