Decades-old convent to be rebuilt

Buying a baby is not adoption 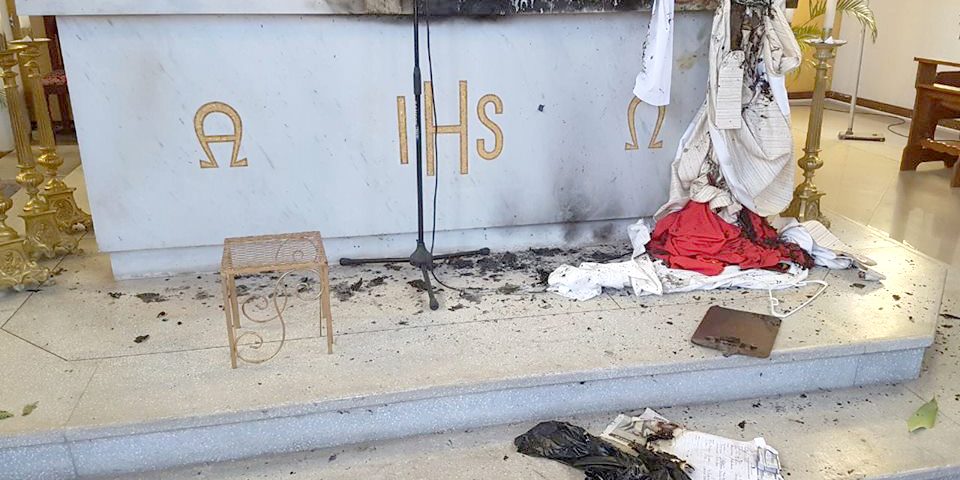 The altar after the arson attack. Source: Sts Peter and Paul Facebook page

Arson is suspected at the church of Sts Peter and Paul, St Andrew. According to a release from parish priest Fr Donald Chambers, at approximately 1.30 a.m. last Sunday an alarm was raised. Police and the fire services arrived within 15 minutes.

Eighty per cent of the sacristy has been damaged, a cross on the altar partially burnt, and a curtain that formed the backdrop for the Sacred Heart shrine was completely burnt. Damage has been estimated at JMD $100,000 (US$766.54 ) according to the Jamaica Observer.

In an interview with the Jamaica Observer, Fr Chambers said: “We feel violated and abused, but we realise that this is part of life; we have to ride the tide and get to the root of it. I told the congregation, ‘listen, we are people of faith, we walk by faith and not by sight, so whatever happens, the church exists not because of a building. It exists because of the faith of the community’.”

He thanked all for their solidarity and “prayerful and moral support”. Many people took to social media, on the church’s Facebook page, to express both their shock and regret for the arson attack. Beverley A Steele stated: “When I lived in Jamaica, Saints Peter and Paul this was my parish church since the days of the old church building. I saw the new church built, and consecrated, attended Mass, Novenas, Weddings, Funerals and other services there. When I left Jamaica, I would return to Peter and Paul for Mass whenever I was in Jamaica.  So apart from the general horror, this desecration hurts. Who could have done this horrible deed? In Jamaica?!!!”

A congregant told the Jamaica Observer that this was a church which really cared for the area in which it was located, especially through the soup kitchen which fed about 50 persons. The kitchen had been broken into, the most recent being last week: “They had to put on a heavy-duty lock on the door as they had stolen the stove, they have stolen the food. It’s really kind of sad when this happens…”

Fr Chambers ended his release assuring the faithful “…there is absolutely nothing destroyed by man that cannot be raised up by God. Therefore, we must walk by faith and not by sight.” Investigations into the attack are continuing.