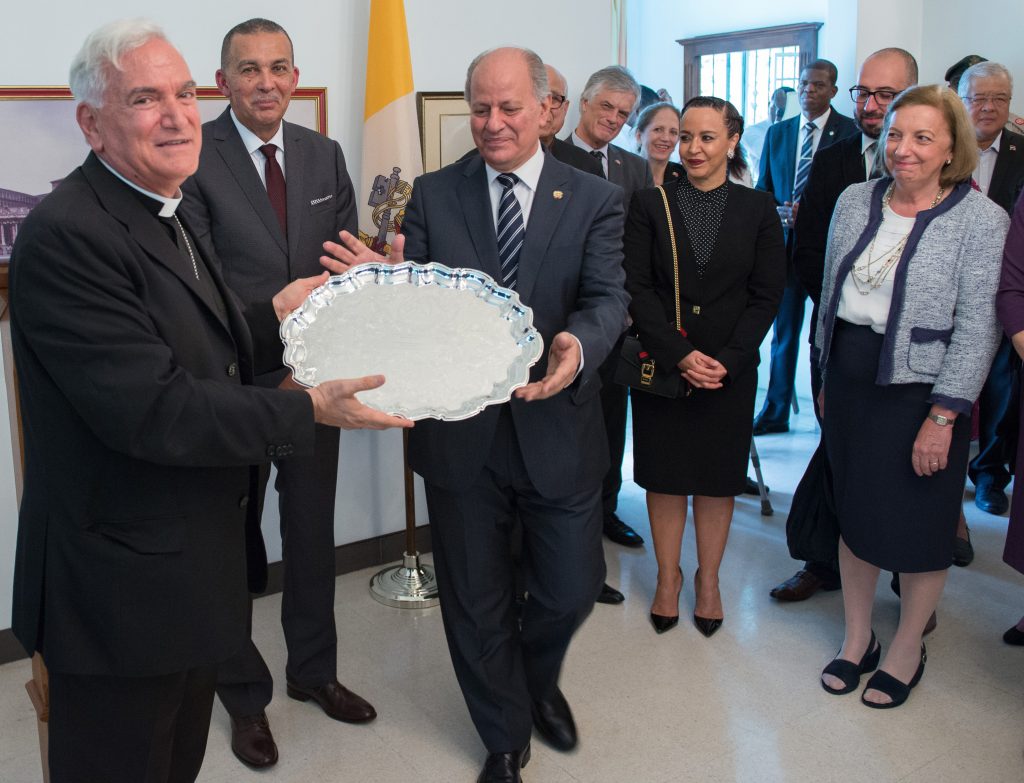 Msgr Girasoli gifted the Ambassador with the official silver Pope’s medal and the President, with the World Mission Rosary. In turn, he received two books including Angelo Bissessarsingh’s Virtual Glimpses into the Past.

Apostolic Nuncio and Holy See-Vatican Ambassador to the Antilles, Archbishop Nicola Girasoli, has thanked the President, fellow diplomats, bishops of the Antilles Episcopal Conference and others for their support and friendship during his tenure, adding that he has made friends from many different spheres of life and a diversity of religions and culture.

The Nuncio leaves the Caribbean at the end of August to take up his new posting as Apostolic Nuncio to Peru. He was appointed by Pope Francis to the Latin American country on June 16.

To mark the end of his service here, the Nuncio hosted a farewell luncheon reception at his 11 Mary Street, St Clair, Port of Spain residence, July 7.

In attendance were His Excellency President Anthony Carmona, Archbishop Joseph Harris, Dr Jose A Serulle Ramia, Ambassador of the Dominican Republic to Trinidad and Tobago and Dean of the Diplomatic Corps, diplomats and Government representatives.

Archbishop Girasoli said since taking up his appointment October 2011, Port of Spain has been “a beautiful posting” and he shall certainly cherish the many wonderful memories of the country. “It has been a great joy to have seen that Pope Francis appointed the first cardinal of this region, Cardinal Kelvin Felix, as well as nine appointments of archbishops and bishops throughout the Caribbean region, most recently of course the very well-known Fr Clyde Harvey.”

He said that he was also happy to have been able to successfully commemorate the historical link with the country’s first Prime Minister Dr Eric Williams at Independence celebrations in 1962, at the PM’s former residence, now the official home of the Holy See.

Describing the occasion as “heart rending and very nostalgic”, President Carmona affirmed that the celebration is not about sadness, rather happiness as a veritable general, a soldier in Christ is leaving to pursue the imperatives of faith and diplomacy in Peru. He thanked Archbishop Girasoli for his spiritual aura, the strength and persona that he brought to these lands, who together with people like Archbishop Harris and Bishop-elect Harvey, all have “maintained that vanguard of spirituality in Trinidad and Tobago”.

In delivering his remarks, Ambassador Ramia commented that bidding farewell to a man of such moral, intellectual and human calibre is quite difficult but “it is better not to do so, as we would be too naïve”. “The whole Caribbean, with its magnificent sea and territories and enchanting peoples should not allow this man to part ways with his necklaces made with coral reefs and the creativity of its delightful people.”

He continued, “That is why Msgr Girasoli is no longer a foreigner. He not only belongs in his beloved land, Italy, where he is loved like a child loves his mother….you are, dear Monsignor, a man who belongs to the world and especially to the Caribbean, where its men and women know how to honour somebody who deserves it,” he said.

The brief formal ceremony involved an exchange of mementos with the Nuncio receiving a diplomatic silver plate from representatives of the Diplomatic Corps.